IE’s new sports mission: To be the premier ‘top 10’ MBA program for rugby

On November 20, 2010, both the men’s tackle and men’s/women’s mixed touch rugby teams went to Barcelona for the 2010 Rugby Iberian Cup…and took home both trophies!  The other two schools that participated in the tournament were IESE and ESADE.  Approximately 15 men made up the tackle team, and 5 women and various members of the men’s team comprised the mixed touch team this season for the 7’s (7 people per side) competition. 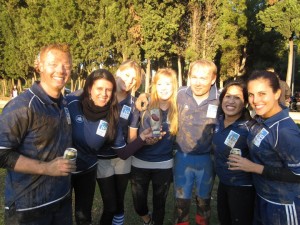 After losing to both teams in Barcelona this past April at the Spring Fling sports tournament, our single focus was on growing a legitimate team, training early and hard, and showing the other two schools we were ready for a rematch.  We launched an official club with elections, developed a formal training regiment, and received financial support from the student office to purchase jerseys.  And a rematch it was.  After a heavy rain soaked the rugby pitch, the clouds parted, the sun came out, and it became a mud-soaked battle.  IE’s Jeff Carroll dislocated his shoulder, and Juan Pablo Casado broke his thumb.  IESE’s captain broke a finger so badly it needed surgery, in addition to the many cuts and bruises sustained that day. 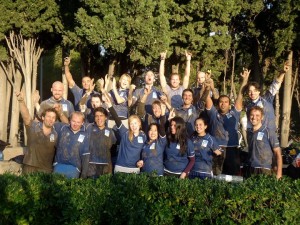 The mixed team was equally competitive, and more importantly, proved that a school like IE can support both a men’s and women’s team.  After all, rugby isn’t just for the guys anymore!  In fact, in many ways the mixed team was more fun because it was more integrated, and it was fun to all be in Barcelona together.

Though I have graduated, I’m still in close touch with the team, captained by the new president Mike LaMothe.  They’re already beginning to train, discussing corporate sponsorship and looking forward to a rematch this April at both Spring Fling and MBAT. I believe with enough momentum and growth of our reputation as a school that wins competitions, IE will not only be one of the great MBA programs of the world…it will also be one of the great rugby programs of the world!