On education, the British Prime Minister and virtual Champagne 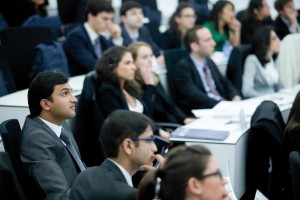 “MADRID — With the world economy mired in recession, the British prime minister learns that one of his country’s largest banks is experiencing liquidity problems and is close to collapse. The government has three options: It can publicly bail out the troubled bank, risking widespread panic in the financial sector; it can secretly move to shore it up; or it can leave the bank’s fate to the market. The government’s top economic advisers are divided. Time is running out. The prime minister must decide. […]

Despite the frequent references to the falling pound, this drama is unfolding not in the Treasury or the Bank of England, or anywhere in Britain, but in a classroom at the IE Business School, Madrid.

Welcome to “10 Downing Street,” an economic policy simulation game in which students adopt the role of the British prime minister. Over the course of an 80-minute class, six teams of students debate policy options before voting on a course of action. The option with the most support is then put into practice, giving rise to a new set of choices and debates. The game’s author, an economics professor, Gayle Allard, said the teams must collaborate rather than compete, “because in government you have to decide.” […]

Ms. Allard test-drove the course before presenting it to students. “I went through on principles,” she said. “At the end I had a choice, and I chose not be re-elected. I did the right thing.” Her students, however, manage to balance principles and popularity. Although one adviser suggested drastic income tax cuts on the eve of the election, the class demurred. “That’s the last five years in the U.S. all over again,” one student said. Instead, the class opted to allow interest rates to rise very slowly, sustaining a recovery that, while modest, was sufficient to secure re-election. […]

Mr. Constantine, the project manager, said the game cost “three or four times” as much as a conventional multimedia project and took 18 months to complete. The school also had to hire English-speaking actors. If the game caught on, Mr. Constantine said, “next time I want to hire Penélope Cruz.”

Outside in the real world, Spain has just had its credit rating cut from A to BBB+. Tax revenue is down and unemployment is up. But back in the classroom, the students are celebrating their virtual victory with virtual Champagne.”