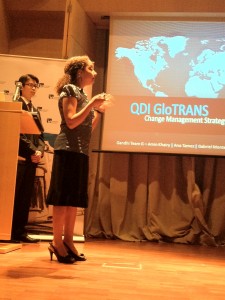 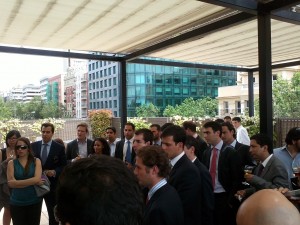 Let´s give applause to the winners of the last of the three Change Modules during the International MBA program – Making Change Happen. The winners are: Yuyun Hartono, Alexander Larach, Mario Cámara, Jordan Bish, Nada Shenouda and Amine Khoury. After a series of classes given by specialists and analyzing a case that focused on change at an organization level, this is what Amine Khoury had to say about his experience during the Making Change Happen module.

“While finalizing the MCH consulting project and preparing for the first round, I was confident that we were going to excel at the presentation, but a bit skeptical about making it to the finals. It was when we got elected amongst the Picasso team that I knew we could potentially reach the 1st place, even though the competition was fierce.

I am a computer and telecommunication engineer who worked as a consultant in the technology sector prior to my enrollment in the IMBA program. Each individual in our team came from a different field, ranging from communication to consulting. Some of us had never undergone a similar project prior to the MCH event, while others had; nevertheless, everyone’s contribution ended up benefiting the team not only due to the mixture of experiences but mostly due to the cultural diversity.

What I found most valuable about this assignment was the fact that we were exposed to a real strategy consulting project that was actually undertaken by one of the biggest consulting firms in the world. This helped a lot of the students to get a taste of what it would be like working in such a sector, especially those coming from different fields and who were not certain of what a true consulting project might look like.”