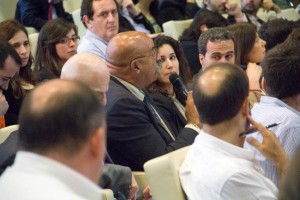 …the Venture Day 2012 finalist pitches. The five offline projects were up first. I finally had the chance to see projects and pitches of two other fellow Venture Lab mates: Mariano Vazquez (Senstand) and Antoine Woitrin (Salinas de Formentera). Unfortunately, there was a technical issue with Mariano’s slide deck and his text did not show properly. I felt really bad, but he handled it very professionally. One thing to note was that most of the offline presenters were very formal and in suits while the online presenters (including yours truly) were casual and dressed in jeans.

As it turned out, the running order of the pitches had holoholo taking the stage in the eighth spot. At first, I thought this was a bad thing because by then the jury would be super tired after being there all day, and just leave more time for me to get nervous. However, going on eighth gave me the opportunity to get a feel for the type of questions the jury was asking and prepare accordingly. Additionally, as more and more teams pitched, I found myself getting less and less nervous. By the time I was about to step on stage, I had it in my mind that I was just there to tell my friends about a ‘cool’ project that the team had been working on for the past few months.

When Liz Fleming, the Deputy Director of the Venture Lab introduced the project, it was on! All the brainstorming, mockups, practicing, feedback, and hard work came down to a seven-minute pitch followed by a seven minute Q&A. I walked to the center and left it all on stage. 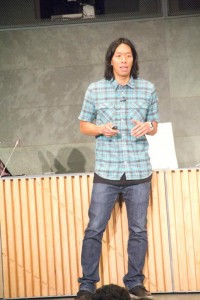 Holoholo is a mobile, location-based, scavenger-hunt style game, but with a storyline. With holoholo, users physically follow a storyline through a city by checking in to various locations where they will solve riddles or complete challenges related to the plot to unlock subsequent chapters of the story and earn points. Holoholo is like a taking the game mechanics from ‘Where in the world is Carmen Sandiego?’ and combining them with the action and adventure of ‘The Amazing Race’.

Jay is an experienced Product Manager with broad expertise in the new media and Internet industry. He has managed small to medium teams in the successful design, development, and deployment of interactive products ranging from small websites to comprehensive online educational applications. Jay is passionate about innovation and disruptive technologies.

Last month, Jay earned an MBA from IE Business School where he was a board member of the Entrepreneurship Club and the Venture Capital & Private Equity Club. He is currently working on getting holoholo off the ground.