Written by Jason (Jay) Hum – IMBA (Class of 2012) and co-founder of holoholo, which won 2nd place at Venture Day 2012 in Madrid. Check out his Blog: http://about.me/jayhum 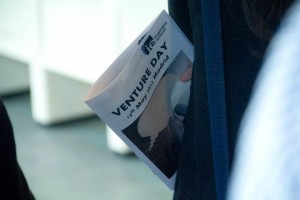 The email hit my inbox at exactly 11:13am on April 30, 2012. The subject, in all caps, read: ANNOUNCEMENT OF THE VENTURE DAY FINALISTS. My heart rate jumped. I did not read the email, but instead scanned it looking for the project name. When I saw ‘holoholo’ with my name beside it under the list of finalists, my heart rate spiked. Minutes later, I started receiving congratulation messages via email, whatsapp, facebook, and twitter. Needless to say, I was stoked! I called one of my teammates, who was sound asleep, and just said: “Dude, we’re in!”

A week and a half later, on May 10, 2012, I walked into the Fundacion Rafael del Pino for Venture Day 2012 Madrid around 1pm. I wanted to attend the morning sessions, but the finalists’ pitches were scheduled to start at 5:15pm, which would have made for a very long day. I needed to be fresh and on point for the pitch.

I arrived just in time for a panel discussion on the following topic: ‘The Accelerator: A global startup phenomenon, Recipe for success or disaster?’ involving Peter Bryan, Miguel Arias, Gary Stewart, Martin Kelly, Ali Partovi, Jerry Kennelly, Jose Maria Cobian, and Rachida Justo. It was a great discussion. Many of the issues that were brought up were relevant to our situation since the team had already applied to a few accelerators.

After the panel discussion, everybody went for lunch. I wanted to do a test run of my presentation because the slide deck included two videos with sound and music. However, the audio/video technician also left for lunch. While I waited for him to return, I went on stage and ran through the pitch in my head and sorted out where I wanted to position myself during the actual pitch.

Paris de L’Etraz, the Managing Director of the Venture Lab, took the stage after lunch to introduce the Venture Lab. During this time, I was up in the audio/video booth with a few other finalists to test out the slide deck. I’m glad I did because I caught a few things that needed to be changed. So there I was, up in the audio/video booth editing the slide deck an hour before the finalists’ pitches were set to begin. When I returned to the main room, one of my teammates turned to me and said: “You were editing the deck weren’t you?!” I just smiled. He knows me too well. 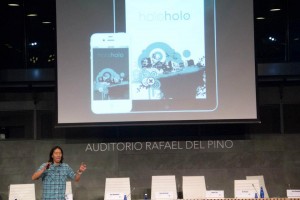 Next up was Ali Partovi who gave a presentation on building successful tech companies in the valley. Ali was a guest lecturer for one of the Venture Lab sessions so I was familiar with most of what he presented. Ali has been on both sides of the table. That is, a successful serial entrepreneur who is now focused on investing in early-stage startups in consumer technology. Even though I had heard some of what he presented for a second time, it still resonated with me. For example, above all, Ali invests in exceptional people with a strong emphasis on the team. I used this to my advantage and referenced this in my pitch.

An hour before the pitches were set to start, there was another panel discussion on: Serial Entrepreneurship & The Entrepreneurial Mindset: Nature vs. Nurture involving Paris de L’Etraz, James Tan, Jerry Kennelly, Ali Partovi, Michael Kleindl, Jens Roehrborn, and Joe Pistrui. My attention floated in and out with this one because 1) I was starting to get anxious about pitching, and 2) friends, classmates, and acquaintances were wishing me good luck in person and via whatsapp, twitter, and email.

At 5pm, the Venture Day semi-finalists started things off and were warm-up for the main event. These teams were given the opportunity to present a two-minute elevator pitch. Big shout out to my fellow Venture Lab mates Chauka and Shared Secrets for their awesome pitches! You guys rocked it!

Now, the main event…. TO BE CONTINUED….

Check back soon, to read the final part of this great story and to see how Jay and holoholo left everything on the stage!

ATTENTION: New Key Dates for the November 2012 IntakeDo you dare to change your life?