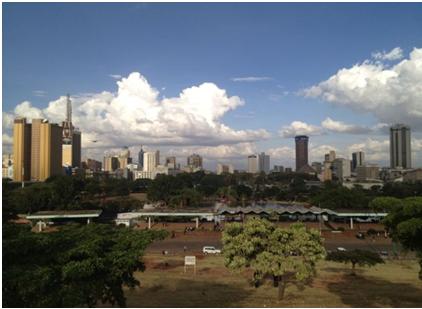 As I set off from the equatorial temperatures of East Africa in mid November 2013, I embarked on a journey into an unknown but promising experience. Over 6,000km and two time zones later, I landed in the capital of Spain in Madrid. This not only marked a long journey in terms of distance, but also marked the beginning of what I hope will be an exciting experience as an International MBA student at IE.

It had been a leap of faith and a tough decision to make to take a year off from what I was doing back in Nairobi to enroll in an MBA class. The decision to pursue it at IE in Madrid was also advised by several factors :- (i) It is a top school, (ii) It is in Madrid, which though in Europe, is more to the south, hence the temperature shocks wouldn’t be that great (or so I thought); and (iii) I was keen to learn a new International language…Español. I am fluent in English, Kiswahili and the lesser known Dholuo, but I had always been keen to learn either Spanish or French; so I guess Madrid and Español won that battle in the end. Plus I subscribe to the belief that the best way to learn a language is to live and interact with the native speakers.

Fast forward to 18 November 2013, and here I was at Barajas Airport, welcomed by a 6 degrees Celsius with a wind-chill and some rain in the mix. At this time of the year, back in Nairobi it would have been a more comfy 24 degrees. Anyway I was expecting it, …so no surprises there. With my zero repertoire of Spanish vocabulary, I managed to sign my way to my new abode for the next 13 months…. The race was on now!

I will pick up from here as I try to share my observations so far in what is turning out to be a great but challenging experience.

Safari is a swahili word which means journey, and I will tug you along on my safari through IE as I share my experience in Madrid