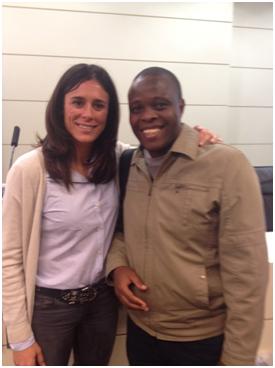 …let´s fast forward to the orientation and some of the key moments.

IE has a way of systematically integrating the new IMBA students into the IE community through a series of events, which I found very useful. The clichè term on everyone’s lips those two weeks was “networking;” I have an electronics background somewhere in my undergraduate days, and networking to an engineer is something totally different. I am very poor with names, as I have the memory of a goldfish when it comes to remembering them. Thus, you can imagine the skill it would take to remember all new MBAs from more than 75 nationalities. Other than the Olympic games and UN conferences, you would struggle to find a more diverse gathering of different nationalities. In the end, I felt I had the short end of the stick, as it is rather easy to remember my three syllable name.

I feel that it wold be unfair to water down the experience of any hopeful new IMBA by divulging all that happened in that orientation week and the subsequent Launch weeks; so I will just touch on what I found fascinating.

The talk by Edurne Pasaban would be one of the key highlights. You see I am a hobbyist hiker, and back in East Africa, I have managed to climb both Mt Kenya and Mt Kilimanjaro, the two highest peaks on the continent. At 5,895m, Kilimanjaro is nauseatingly high, and I had my fair share of altitude sickness getting to the top. Then here was this wonderful lady telling us how she had scaled 8,000m plus mountains….felt like bringing a skate-board to a formula 1 race comparing my achievement to hers, but it was inspiring. Plus “networking” was being used a bit less often!

I got lost in the metro a number of times as I tried to get a grip with my new environs, and boy did I struggle to get a spanish mobile phone line. You should try using a combination of sign language, smiling and waving when you have difficulty in communicating (for those of you thinking Google translate…I did not have a working phone line, so zero data to google….I had thought of that). “Baby steps…baby steps…” I was going to adapt. I don’t think I have a choice.