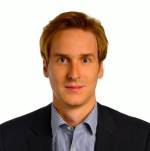 Michael Gustav Helfenberger became the most recent recipient of the Swiss Life Award (formerly Jefferies Award). The distinction aims to recognize the most compelling theses from Swiss finance degree candidates studying at the university or graduate level. Michael’s winning 110 page submission draws from his undergraduate studies as well as years of experience in private banking. Last week I had the pleasure of speaking with Michael to learn more about his story and his future after IE Business School.

“In Switzerland we do things different” I heard over and over again as Michael described his path into banking. As an 11 year veteran of the finance industry it seemed Michael must have been much older than he looked. Nope. Michael started the International MBA program with me this November having just turned 27. Doing some quick math I asked if he started working when he was sixteen. “Late 15 actually” he replied, “I started early”.

Michael chose to begin his three-year apprenticeship (common in Switzerland) with UBS because in his words he was “always a money person.” After rotating job roles every six months, his deep familiarity with the business led to an opportunity in the UBS key talent development program. So by age 19 Michael began to focus on international private banking. That’s when the company asked him to move to Panama City and begin his first experience living abroad. Six quick months in Panama, followed by a few more years in Switzerland, and another move to Mexico City all helped Michael develop a broad understanding of cross-cultural international banking – both from a client perspective as well as corporate.

“That’s really where I got the idea for my thesis” explained Michael. It used to be that Swiss banks either had to be onshore – establishing an office in a new locale, investing in operations there, and managing accounts according to local regulations – or entirely off-shore – keeping the bankers, accounts, and operations in Switzerland and traveling to foreign clients for advising as needed. Michael compared these approaches and proposed a third blended approach that takes advantage of local expertise while minimizing the expense of running highly complex operations on foreign soil. Listening to him explain the solution reminded me of IE’s blended format programs that have a similar approach in the field of higher education.

With his work described by the award jury as focusing on “one of the most important regions of the future” there is no question that Michael has already made notable contributions in banking. Now that Michael has joined the IMBA program at IE Business School though he is open to a possible career change. He is currently tossing around some entrepreneurial concepts in gastronomy and keeping a close eye on opportunities in the consumer goods industry. In the meantime we might see Michael on the tennis courts or enjoying a “chupito” with friends between classes. In fact, since he loves international travel as well, I’m hoping Michael will help represent us next summer at the

MBA Tournament in Paris. However his future unfolds, I’m glad to have Michael as a classmate this year at IE and look forward to learning more about his story and so many others here in Madrid.

From all of us at IE, Congratulations Michael! …and best wishes for a fantastic year!

Michael’s winning thesis is titled “Onshore vs. Offshore Private Banking: An analysis for Multinational Swiss Wealth Managers Operating in Latin America, Exemplified by the Mexican Market”. The Swiss Life Award is presented as a collaboration between Swiss Life Asset Managers, industry publication “Finanz und Wirtschaft”, and the Institute for Financial Services Zug (IFZ) of the Lucerne University of Applied Sciences and Arts. Additional details and an official press release are available from Swiss Life.