Networking: Why and How to Build Long-lasting Professional Connections

Networking. Some do it as naturally as breathing. Others have accepted it as a dreaded but necessary evil. Some fall somewhere in the middle. Yet everyone seems to agree that networking benefits your professional life. Have you ever stopped to wonder, though, what role your gender plays in your networking endeavors?

Until IE’s Women in Business Club’s panel on networking, I hadn’t.

Lead by moderator Patricía Gabaldon (IE professor), panel guests María Teresa Villanueva, who heads business growth initiatives for women in Latin America, and Patricía Araque, who works with female founders of tech startups, passionately discussed how women in business may network differently than their male counterparts and what these women can do to leverage the power of networks to work for them.

The panel started with Pantene Pro-V ‘s ad which shows the discrepancy between how men and women are labeled in business today (e.g. “Boss” for men verses “Bossy” for women). The message to women was to not let “labels hold you back,” but, as María Teresa related, women who fear being labeled negatively are often not as aggressive at networking and, among other things, are significantly less likely to talk about their career aspirations while networking.

The discussion explored many tricky aspects of women networking in what is often still a “man’s world,” but the important takeaways were straightforward enough:

The discussion ended with another video, the “Like a Girl” ad by Always, which explores the negative connotation of the phrase “like a girl.” In the end, people were asked to redefine the phrase in a positive way. This is similar to what the motivational women on the panel suggested to us: Redefine how women network. Be bold, proactive, and resourceful. Network like girl! 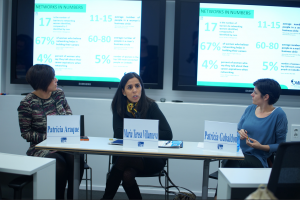 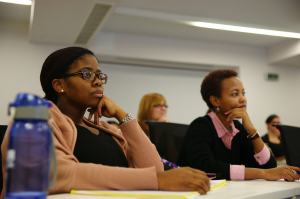 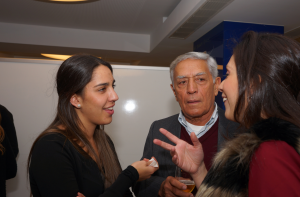