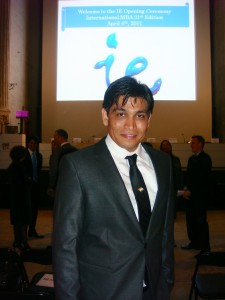 Anand Kumar’s list of accomplishments is impressive! Just those four items are enough to make him a poster child for MBAs.  But the list above is missing one key ingredient… IE Business School.

Like many others, Anand was drawn to IE because of its reputation for cultivating the entrepreneurial skillset.  By the time he had applied to IE, Anand, who is originally from India’s northern state of Haryana, had already bootstrapped three startups.   But although the field was hardly new to him, the evolution of his experiences had not always been easy.

The first, a social network for students studying for competitive entrance exams like the GMAT, actually got good traction in the student community.  The problem for Anand was that it was a solo project.

“I did everything—I’d go to my day job in the morning and then come home and work on the website at night.”  While his undergraduate background in computer science had given him the skills needed to make the website a reality, the workload was grueling, often keeping Anand working into the early morning.  In addition, he admits that he had problems securing advertisers that would have helped turn the project into a profitable endeavor.  The website died after the website server crashed one night, putting him back in square one.  “I had no money to continue,” he says. “Or stamina,” he adds, noting that one of his most important take aways was “You burn out if you do everything yourself.”

Building upon what he learned, for his next project Anand used his wages from his day job to hire two employees, who worked out of his apartment while he was at work.  This company was also web-based—a free search engine designed to help small businesses better connect with interested customers.  This venture, too, got great traction with 30,000 businesses signing up in the first six months.  But this business also failed.  Anand knew now how to target the market well, but he had no advertisements to generate revenue and was not familiar with other channels available.  “I didn’t  have the required knowledge to raise funding from Angels or VCs,” he says regretfully.

For his third, and ultimately successful company, Anand leveraged on all his experience—this time he wanted a business model that generated revenues and made profits.  To run his new company, a web-based job-seekers and employers matching service, Anand hired eight staff members and a general manager to help run the business.   The India-based company, Hugei, successfully competed against the big players in the market, eventually diversifying into headhunting and temp staffing.  However, Anand, who was working in the US at the time, ultimately decided to sell the company because working two jobs on opposite sides of the world was starting to take a toll on his health.

This is where IE came in.  Shortly after matriculating in IE’s International Masters of Business Administration program in April of 2011, Anand started taking full advantage of all that IE had to offer. 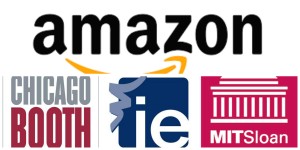 “IE is amazing at teaching general management and entrepreneurship,” Anand remembers, stating that he was extremely happy with the education that he received at IE.  The student body had a lot to do with that, he says—“people from so many countries together”—so many opportunities to learn from each other and build friendships.  Anand is especially adamant about the importance of this last one, stressing that it is incredibly important to build these long-term relationships because they form your network after graduation and will be helpful in your career later on.

In addition to the people, though, he remembers IE as having “amazing classes with case-study approach”. The case study methodology, he notes, is something IE uses particularly well.  In fact, Anand has kept all his case studies and still re-reads them to this day in order to gain a deeper understanding of various real-life challenges businesses face and the decisions they make to address them.  He also noted that IE’s emphasis on teaching soft-skills is extremely relevant in the “real world” for growing in one’s career.

During the second half of his MBA, Anand elected to take advantage of the partnerships offered by IE and do a long term exchange at The University of Chicago Booth School of Business.  Booth gave Anand the opportunity not only to work with entrepreneurs who had been in the field for a long time and learn in a hands-on environment, but also to build up relationships in the US.  In addition, Anand found the theory-based curriculum at Booth to be a nice compliment to IE’s case-method-based approach.

Upon his return to IE, Anand had the opportunity to chat with a representative of MIT Sloan School of Business, who was visiting Madrid to present IE’s joint program with MIT.  Because he was graduating, Anand was not eligible to enroll in the dual degree program, but the program advisor encouraged him to apply for MIT’s post-MBA Master of Science in Management Studies (MSMS).  Anand applied and was accepted into the program.  He was even able to convert his post IE job offer at an ecommerce startup in Indonesia into an internship so that he could start at MIT the following fall.

MIT gave Anand a chance to dive deeper into his interests through more focused electives.  He noted that because of his choice to attend Booth for a long exchange program, he had been restricted in the number of electives that he could take at IE.  Anand’s post-MBA studies allowed him to hone his skills in a highly international, friendly, and down-to-earth environment that he says reminded him of IE.

“MIT taught me to pursue what my passion is—not fads,” Anand remembers.  In fact, his education at MIT, allowed Anand to entertain the idea of interviewing for Amazon as Product Manager, a position he felt matched with his interest in building products by focusing on customers first.

Now, as he speaks to me from his office at Amazon, Anand talks about how he loves his job.   He talks about the leadership principle called “ownership” at Amazon which empowers the product managers to go beyond the ordinary, think big and raise the bar, and build products that address customer needs.  He speaks about how all he learned at IE, Booth, and MIT—from the finance skills he original lacked to the entrepreneurial thinking on which IE has built a reputation—has allowed him to be a successful product manager at the online retail giant.  He adds that perhaps, one day after Amazon, he can even re-apply those skills to return to the entrepreneurial world.  His education and experience have prepared him for a good future doing what he loves.

But now, looking back Anand offers those of us just beginning our journey at IE one final set of advice:  “Learn the ins and outs of business during the general management part of the program and deeply follow the case studies!  For the electives portion, follow up on skills in your basic toolset that you think you are still weak at and then dive deep into electives you enjoy.  Follow your passion—this will help you chose the right set of elective courses.  Follow your heart to choose your career!”