Ms. Cecilia Malmström at IE: European Commissioner for Trade, talking on the TTIP and the trade agenda for Europe

IE School of International Relations is pleased to invite you to a discussion with Ms. Cecilia Malmström on the much debated Transatlantic Trade and Investment Partnership (TTIP), and the trade agenda and priorities of Europe. The event will take place on Friday, March 6th at 1.00 pm (Room S-105, Calle Serrano 105, Madrid, Spain).

Since assuming office in November 2014 as the new Commissioner for Trade under the Juncker Commission, Ms. Malmström and her team have been at the forefront of the negotiations of the TTIP with the objective of reaching a balanced and reasonable agreement with the U.S. that respects Europe’s safety, health, social and data protection standards, and Europe’s cultural diversity. When negotiations are completed, this EU-US agreement would be the biggest bilateral trade deal ever negotiated. 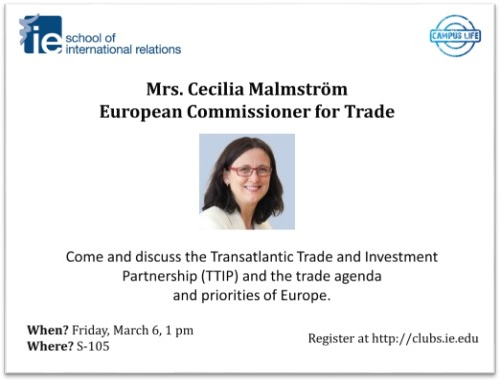