With the dawn of the digital era, the traditional LEGO model faces its greatest ever challenge. Yet MBA grad Freek Duppen, senior manager, operating model development, at LEGO Group in London, thinks that the toy manufacturing giant is more than ready to adapt.

According to Common Sense Media, 90% of US children have used a computer and 81% have played video console games by the age of eight. And in the UK, one in three children own their own tablet, according to a 2014 report by communications regulator Ofcom.

Freek, from IE Business School, is part of a cross-functional team responsible for developing and leveraging LEGO’s operating model. He says LEGO is driving new innovation to integrate digital and physical play.

Previously, the pioneering young professional worked at Capgemini Consulting in the strategy and innovation space. But, determined to take his career to the next level, Frederik relocated to Spain for an MBA.

How can LEGO respond to the demands of an increasingly digitized world?

We consider digitization as a way to make our core business — the physical LEGO model — even more attractive and exciting to consumers. To do this, the company leverages digitization over a broad range of topics.

A good example of this is our recent launch of LEGO Dimensions, a “toys-to-life” product that blends video gaming with physical products. It allows you to build mini-figures, vehicles and gadgets out of bricks, and then transport them into the video game. It combines characters and worlds from different LEGO themes, so you can have Gandalf and Batman running around in a Simpsons’ world!

We also leverage social and digital media to reach our consumers. We get over a 100 million views each month on our LEGO YouTube channel, providing content to kids to spur their imagination and helping them create new storylines for their physical play experiences.

Why did you decide to pursue an MBA?

I wanted to beef up my business knowledge. I really enjoyed consulting, but I was still curious about what else was out there, and I felt like my learning curve was flattening.

I figured an MBA would be a great structural break, which would broaden my horizons and allow me to make a more informed decision on what to do next.

Why did you decide to pursue a career at LEGO?

I had already worked with LEGO as a consultant and I was truly impressed by its corporate culture, people, and the simplicity of how it went about certain things. 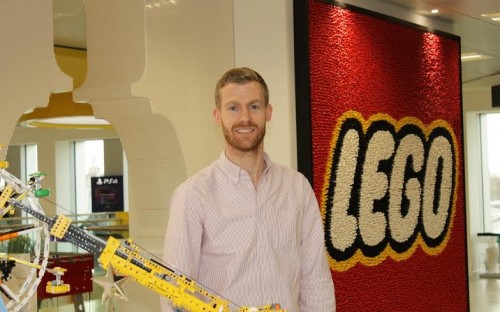 What advice do you have for MBAs considering a career at LEGO?

Make sure you have a good understanding of the company culture. At heart, LEGO is a Danish, family-owned company, and with that comes a specific way of doing things.

LEGO places an above average emphasis on collaboration skills. People are very much expected and encouraged to collaborate, both within and across functional areas. Being able to demonstrate that you can work effectively with other people will certainly benefit your application.

Why did you choose to study at IE Business School in particular?

IE was my number one choice from the start.

What I appreciated most was the innovative nature of its curriculum, which is largely customizable to one’s own needs and preferences.

It has some really practical “lab” modules, which bring your newly-acquired knowledge and skills to life, and great infrastructure to support entrepreneurship.

What does a typical working day at LEGO mean for you?

Our work in the operating model team revolves around talking to and facilitating meetings with stakeholders in the organization, analytical work on the operating model itself, and problem-solving in the form of driving task forces — all powered by great coffee and the occasional game of foosball!

How have you profited from your MBA experience?

An MBA helps you to move forward, faster in your career. The experience of continuously being challenged — academically, culturally, or otherwise — truly boosts your personal development and is hard to replicate in a corporate setting.