Santiago Iniguez talks about being The Dean! 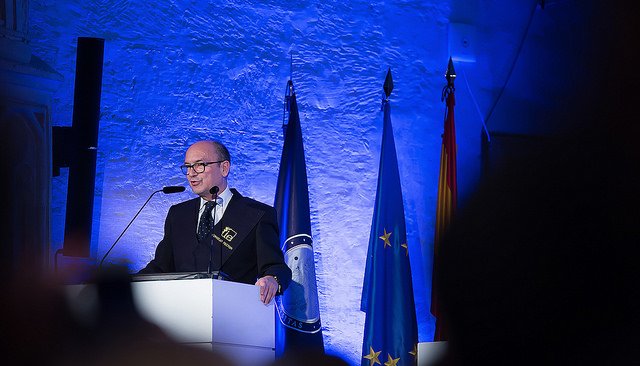 I have always believed that the dean of a business school carries out a role equivalent to that of the CEO of a multinational company. A bold assertion, perhaps, but one that is upheld by a glance at the job descriptions for deanships, which increasingly emphasize managerial and leadership skills over traditional academic qualities.

Furthermore, I would argue, our role as leaders doesn’t depend on any formal empowerment by our institutions’ provosts or presidents, or on how that role is constituted in our schools’ bylaws. Surely leadership isn’t something that is given, but is instead assumed. In short, we deans should not wait for an official mandate to lead transformation and innovation within our schools: ours is an internal calling that comes into its own when we are appointed.

Our mission as leaders is to defend the role of business schools as the trailblazers of higher education, the beacons of management knowledge, and the cradles of business leaders and entrepreneurs.

Obviously, the pride we feel about the responsibility vested in us should be reflected by our commitment and willingness to be accountable to the wider world.

Similarly, as with large companies and other organizations, deans play a key role as a bridge to the outside world. In reality, deans are the public face of their institution, and this means taking an active part in public debate, particularly bearing in mind the important mission that business schools are playing in creating an increasingly global society.

In leading our schools, our many stakeholders, internal and external, will have great expectations regarding our performance. The question is how we balance those expectations.

As an article published in Biz Ed some years ago noted, deans identified four major challenges in leading their schools: managing faculty, identifying and pursuing new revenue sources, distinguishing their business school from competitors, and managing enrollment and programs.

What most surprised me most about the results of the research was what seemed to me to be the imbalance between the time deans spent dealing with their school’s internal stakeholders and the relatively small amount of time handling the school’s external relations. How did this compare to the priorities of CEOs, I wondered, aware that most of the opportunities for business schools lie beyond their ivy-covered walls, a reality that should have consequences for how deans address their priorities.

That said, the role of a business school’s dean varies according to the role and the nature of their institution’s mission. Traditionally, the deans of business schools located within universities have tended to exercise what we might call delegated power, insomuch as the university’s board establishes the limits on their activities. This may, for example, prevent such deans from creating new programs or recruiting more students and teaching staff, as well as limiting their scope for adopting new strategies. But the deans of independent schools, or those that are part of universities but enjoy greater independence can outline their own strategies, albeit with the approval of the school’s board.

My own experience is that more and more university-based business schools do actually enjoy a certain degree of independence, largely as a result of their need to respond to the demands of the market quickly and flexibly. But the requirements of business schools’ stakeholders change more quickly than in other disciplines, such as the liberal arts, for example, and competitors tend to move quickly, so that schools bound by red tape and lengthy internal negotiations with decision makers, all aimed at achieving a balance between the interests of different departments or schools, are likely to lose the edge in a highly aggressive market.

If we accept that the role of the dean of a business school is best compared to that of the CEO of a multinational company, I would argue that we therefore must tackle four main responsibilities:

-To be the main architect of the school’s strategy, and to make sure that the strategy is properly implemented.

-To be the person responsible, in the last instance, for managing the school’s resources, as well as developing a sustainable growth plan.

-To capitalize on the school’s talent, particularly in regard to teaching and research.

-To strengthen relations with stakeholders, and not just those on the inside such as teaching staff, students, graduates, or corporate partners, but also with external players.

The problem here is that it’s not always easy to measure a dean’s success in carrying out these activities, particularly in the short term. As with CEOs, yardsticks are needed, among them obviously the school’s financial results — an aspect all too often overlooked in education, particularly in state-funded institutions. Stakeholder satisfaction, particularly that of students, is perhaps best measured perhaps by their professional development after graduation. Then there is the question of the school’s contribution to academic research, which should be measured not only in terms of quantity, but quality. Next up is the school’s visibility, which can be considered on the basis of the assessments of external stakeholders such as business, other academics, or recruiters. Finally, deans’ performances are also evaluated on their schools’ positions in the key international rankings. Regarding the latter point, it is only fair to point out that a business school’s position in league tables does not necessarily depend on the initiatives that the dean has undertaken, but inevitably, for better or worse, he or she will be judged in this regard. It goes with the territory.

One final word of advice for my fellow deans about to take up their posts for the first time: follow the lead of the best CEOs, and do not wait to put your strategy into effect. The first 100 days in office are essential to lay down your management approach and to chart the course you wish the school to follow; again, in this sense, business schools are no different to businesses.

With a century of excellence behind it, the AACSB has a solid global position that allows it to help its members and business schools’ deans to identify future challenges and better implement their missions. The Visioning initiative, launched by AACSB’s board, aims to identify the main roles of business schools as catalysts of innovation for the global society. I invite you to participate in this initiative by providing your personal feedback and contributing to the task of laying out the ambitious roles that business schools are called on to perform. These times bring fascinating opportunities and challenges and, I am sure, the best is yet to come.

This article is adapted from the book “The Learning Curve: How Business Schools Are reinventing Education” (London: Palsgrave Macmillan, 2011).

IE Alumni startup Lendbox, one of the top 12 #fintech startups in India!The Myth Of the Idea
Categories